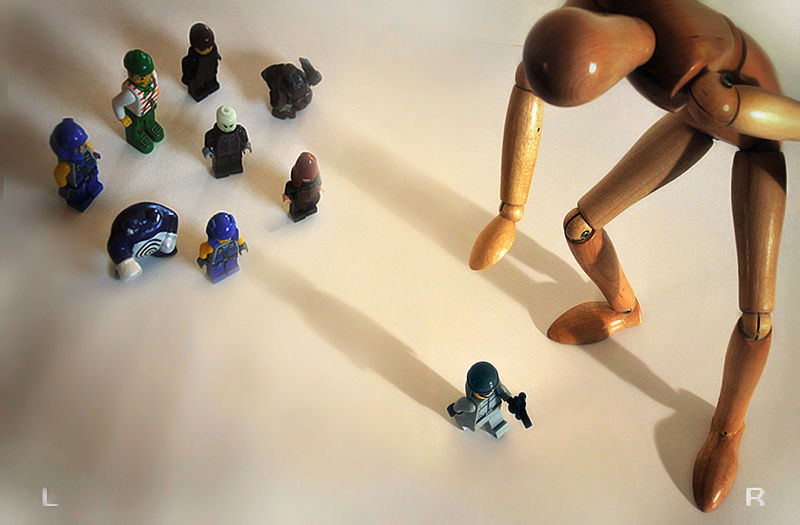 Posted by OurTwoSense (Atlantic Shores, United States) on 5 March 2010 in Miscellaneous and Portfolio.

The lone marching figure was found by Ronnie in three parts in a London street but the menacing crowd are from Lilly’s collection . . Arlo, many of you will know from before and Bebe sends her off-camera regards.

Wishing a pleasant weekend to all our AM3 and Other Friends and Visitors.

Lilly and Ronnie / Bebe and Arlo

A record of timeslots shared :
The O2S Story on AM3
Ten from Our Most Popular Images
Our Spotlight Images
:
All images and storylines © copyright ourtwosense ("O2S") 2008-2020 inclusive

But splinters can be so annoying and painful if not dealt with, brilliant work as always

Photography-wise a well composed image. Have a nice weekend.

Great, they are back! Come on Arlo, you're a big guy ... take that gun of him! :)
Love the angle of the photo's and the great shadow-play!
Enjoy your weekend!

That little guy is going to shoot Arlo's foot clean off this time. Back off, Arlo!

That looks like one rough crowd to control. Haha.

Oooh! This is so cool :)
I love the sense of motion, the scurry of the crowd and the giant that is trying to control them. Indeed, sometimes in the city one feels like this, Big Brother and all. Fantastic.

"It may have been just a splinter to you, but it was half a pack of wood filler to me"

Maybe he will trip over Arlo's great big foot. I am rooting for him to escape, though. He's been through enough.

Good evening, Lilly and Ronnie,
once again make us a nice collection with a funny story about that before. Such small figures are in chocolate surprise eggs. I could give you many. Now they are disposed of all. The presentation pleases me very well. I wish you a wonderful weekend. Dear greetings Christel

Haha, very natural pose and a funny shot!
Now I have to look for my Playmobil figures...

@MadScientist: lol . . these things are very addictive . . you can see a bit behind the scenes on this one here

:) dangerous guy.
Have a nice weekend too !

A nice play with light that casts interesting shadows around the small figures.

Each time i picture you doing your photos, i smile tenderly, super one again !

@k@: smiles, Karine, and thank you . . a glimpse behind the scenes on this one here

Magical! And Arlo hasn't aged at all - great to see him back!

ho gulliver and the lilipitians

I'm really impressed with the way you handled the shadows.

Next step Ron, animation ? Could be grrrrrrreeeeeeeaaaaatt !

Love it and so creative!

Splinters are quite painful you know.....

I love these staged shots. And something reminds me of Avatar, not my favorite movie, but timely for the Oscars!

@Lunamania: Thanks, yes, it felt rather like making a movie . . 'directing' the action on the little set and with all those 'extras' . . (Ronnie)

Gulliver is goingo to make a massacre!

men are so oversensitive !

LOL! Oh you! Love the perspective!

@Magda: hee hee . . this was one where we went live with the 'proof' shots - otherwise, we'd still be refining it now ! (Ronnie)

I can't stop laughing at this! so clever and hysterical...

i especially resonate with the title and theme.

it's the little ones you have to look out for!

Love the storyline on this one.
Especially the part where Ronnie rescued the runaway.
I've missed keeping up with what you two are up to.
Everytime I find a little knick knack or gadget I think of you two.

loves like you are really thinking your stories through

I must say it was put together well....