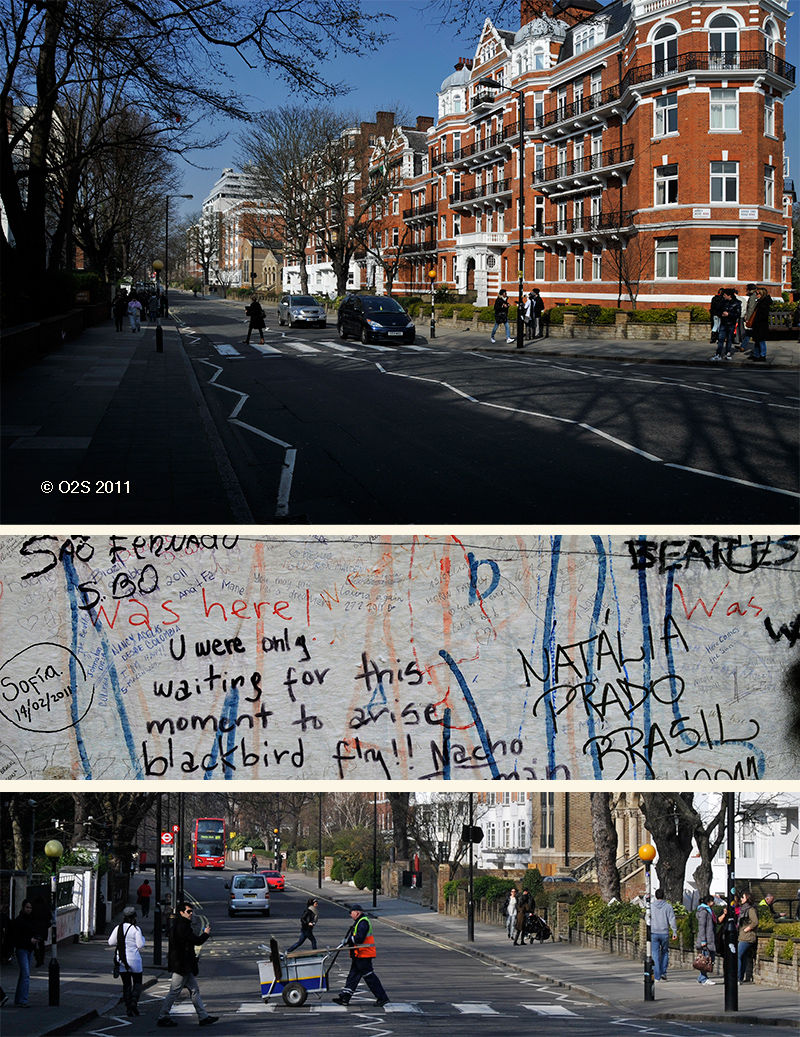 Being There - the There

:
After over 40 years, folks still gather at this Abbey Road location. The studios are on the left behind a graffiti wall that has become a bit of a shrine for fans.

The crossing itself was recently granted Grade II listed status by the government, the first time a piece of roadway has ever been so honored.

The detail has changed but the spirit still hovers.

See it Live ! - when there is enough capacity and view it on the MAP

Return to the 'Being There' posting

A record of timeslots shared :
The O2S Story on AM3
Ten from Our Most Popular Images
Our Spotlight Images
:
All images and storylines © copyright ourtwosense ("O2S") 2008-2019 inclusive

great composition again - different reason . I like to see the both side of the street before crossing.

@Christine: Yes, the spot still resonates. The webcam makes an interesting watch, if you can load it.

Ah, I see......a bit like Jim Morrison's grave at Père Lachaise..graffiti and people hanging around..:-)

well, that's a famous piece of road, isn't it
i have a print of it also, a big square picture containing some strange obsolete vinyl something...

@yz: ha ha . . yes, that'd be it and there's a lot of them around. According to Wiki, ""Abbey Road" sold over 3.3 million copies in the US in a little over a week, making it the best-selling LP of all time"

Is that the reason for the zig zag lines on the road? I had every Beatles album and listened to them over and over again growing up here in middle America.

I think this works very well as a little collage!

lovely architecture in this hood .... i wonder how many tourists pose on the street every day .... !

I didn't know it had listed status... that's quite funny. Nice set of shots.

The zigzag lines at the borders - okay. But what's the meaning of the central zigzag line?

@MadScientist: . . to indicate a prohibition on overtaking.

I enjoy these images. I had the Beatles albums and photos all over my bedroom walls growing up. Just recently there was something on TV about Abbey Rd. First time I've seen it and how people try to copy the famous 4 walking across and stop for a photo.
Glad you explained the zig zag lines. Coming from the states we would probably drive zig zag to stay inside the lines, and perhaps on the opposite side of the road.
Thanks for the webcam link, at 6:30 a.m. U.K. time there is a bit of traffic.
She loves you, yeah, yeah, yeah!!!