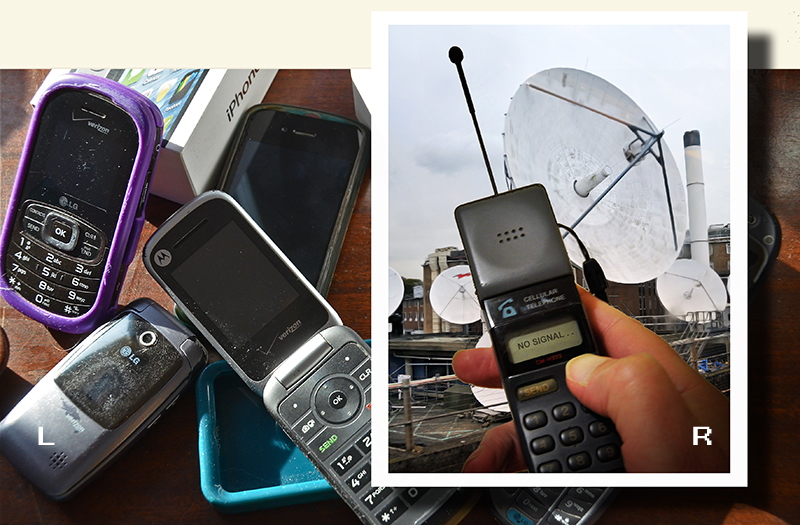 :
Lilly : I found this collection of old phones in a desk - any use to you ?
Ronnie : No, thanks - mine works fine when I can get a ssssignal.
Lilly : Did those dishes come with the phone ?

A record of timeslots shared :
The O2S Story on AM3
Ten from Our Most Popular Images
Our Spotlight Images
:
All images and storylines © copyright ourtwosense ("O2S") 2008-2019 inclusive

I still remember the time when the mobile phone was a luxury goods, and each vowed not to ever touch such a thing.

Perhaps semaphore might be more suitable in your situation Ronnie. You seem to have a little flagpole on the phone

@grouser: I wondered what that was for - I do tend to raise it for distress . .

I like mechanical keys. Smart phones are not for me.

lilly must have searched MY desk, i think ... she would have found very much the same things ...
as to ronnie, you'd better get in touch with the NSA and ask them how to go about it ... they know a thing or two about these matters, i hear ... ;-)

@franz: I've tried, Franz but they seem to put me through the the Russian desk . . ( Ruskie)

The same quest to all! Will it end in another disaster...

A problem that we also know

A great exchange of ideas. We all could use one of those large antennas at times.

:)) The evolution goes so fast as we lose we even the signal !

I fear your phone is not too"smart" Ronnie. Better take Lilly up on her kind offer.

Funny image the one at the right. And the problem is two ways, since I can never call through my TV.

Excellent commentary on our 'throw away ' attitude to ever changing technology. I reckon we all have a few of those lying around;(

@kiwisa: Well, I must admit I have only a basic phone even less advanced than those on the left . . it does all I need it to do. (Ronnie)

curieuzeneuzemosterdpot from somewhere between viewer and subject, Belgium

I had my place cleaned and was surprised at some of the phones I had found.

We were a much better society without cell phones. I hear the red phone booths "across the pond" have been turned into charging stations for cell phones. Your post brings back the days of the "brick" phone. :-)

@Steven: Yes, times of great change in communications and that Sony phone you see here was right at the beginning of the transformation to 'pocketable' devices. (R)

Do you have one of those fancy long extension cords Ronnie, so you can make calls while wandering around the house?

So I heard you could buy this accessory that you attach one end to your phone, then fasten the other end to the wall so you never lose your phone. And if you opt for the copper model, then you don't even have to care about those dish or tower thingies.

I have a bag somewhere in my house with a bunch of phones. Just as you buy a new one it becomes outdated. I think I have a phone like that one in the bag wherever it is. Actually I hate having the phone. I feel like I can't hide from anyone. Now it even tracks where you are.

@Elaine Hancock: Ronnie had one that tracked him but he couldn't get it to tell him where he was! ( from Lilly )

Lily, don't they collect your old phones for use by the elderly as emergency phones?
You've given Ronnie the feeling he's right in step. <giggle>

This resonates with me big time, I can never get a signal when I am at home. I do love the smartphones ability to use internet now to send texts and receive calls.

Very good, its a modern problem, too many phones and not enough signal.

Your inventive mind (love the vanishing writing ;)))) never ceases to make us happy folks, be thanked !

No signal without the latest and the greatest :))

Lack of coordination between the device and the antenna ... maybe?
Thank you my friend! As always a friendly smile!

We have a drawer of old phones, one I swear wears five pounds!!

@beach: I do remember those the size of a house brick with a carry-handle ! (Ronnie)

The antenna on that phone should drag down a signal. In fact, it may just take down the entire network.

The evolution goes so fast as we lose we even the signal !
Have a nice day!

I have some phones to add to the collection.

You know that you can get a personal-sized dish now. Maybe you can carry it around mounted on a broom stick.

@Julie L. Brown, Photobirder: ha ha . . there's a guy lives near me has a dish mounted on his pedal cycle . . says he keeps hearing voices. (Ronnie)